July 05, 2013
Snack time is very important for a writer, it's a break from the computer, or the chance to chill out with a treat and a DVD, so I thought I'd bring snack time to the blog, and try out some new things.

I think crisps would be one of my top snacks, so I couldn't say no when I was asked to try Burts Crisps. I was sent two 40g packets to try, one was wave cut Jalapeno and Red Pepper, and the other Sea Salt and Malted Vinegar. What struck me right away with these crisps was the branding and packaging, not something I would normally pay attention to with a packet of crisps, beyond reading the nutritional information! But Burts Crisps have done a great job here, I like the inclusion of not just the ingredients, but the origins of the potatoes as well, so you can trace where they were cooked. These are British products, made in Britain, and that warmed me to the brand before I'd even tasted anything! But on to the taste test, and my verdict on the two flavours! 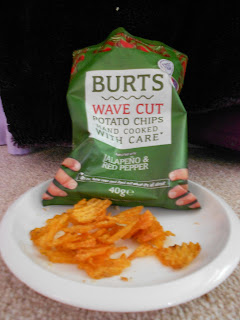