July 16, 2013
Sunshine makes everything better, and while I was enjoying some vitamin D therapy on July 6th, I also popped down to Central Park in Chelmsford for the 2013 Fling Festival. As the festival took a year off for the 2012 Olympics I'd been looking forward to this one for a while, but wasn't sure what to expect from the extended site, and extra hours of fun.

In the end I entered the site just after midday, and left around 10.30pm, so it's safe to say I had some chill time and was occupied, although predictably some of that time was spent queuing for drinks, food, and the increasingly (as hours wore on) grim festival loo's. But I went with a plan, and more or less managed to stick to it, so here's what I got up to:

As I arrived I caught the tail end of Jakob Deist's set in the Beyond Fusion tent run by Limbcare and the organisation Dancing Giraffe. Even early doors the tent had a good number of people in it, who all seemed to enjoy Jakob's cover versions, and original material, such as the atmospheric 'Here Now', which is one of my favourite songs at the moment.


-Next up I headed over to Main Stage 1 to catch another local singer Leanne Louise. I've seen Leanne perform a few times before in local venues, so I had an idea of what to expect, but there was a little surprise thrown in there. Leanne was performing acoustically, this time with an additional guitarist, and the effect was good. Added depth to the melody mixed with the vocals, makes for an enjoyable listen. 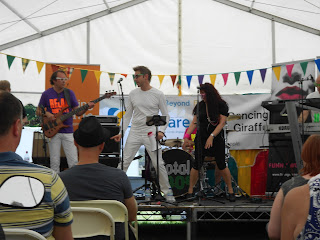 -I managed a second trip to the Beyond Fusion tent to watch Totally 80's, a must-see on my list as I love 80's music, and had never seen a tribute to the era before. I think they fell a bit short on personality and performance, partly as they had a small stage to work on, but I enjoyed singing along to hits like Freedom by Wham, and Video Killed The Radio Star.


-New City Kings - I was wandering around the festival site trying to decide what to do next, and pleasant sounds reached my ears, so I stopped to listen to New City Kings. The band have a singer with good lead vocals, and songs that have a good ebb and flow, and melodies that you can dance to, and listen to easily without hurting your ears. Just the right amount of commercial edge to appeal to a broad range of people while being credible. One to watch!

The Fling isn't just about the musical entertainment though, there were plenty of random sideshows, remote controlled wheelie bins, art installations, a silent disco and party tent, and making tents - which unfortunately were too small, and always packed, so I don't have a festival make to show you! Along with my highlights above I also saw Aussie Colin Cole in the Comedy Tent, Beatrix Von Bourbon (of Britain's Got Talent fame) in the Cabaret Tent, and saw a fast paced, barely pausing for breath, Machine Gun Men do a mix of modern and classic hip-hop in The Loop tent. Of course the sideshows provided a couple of photo opportunities as well!

I left full of pizza, chilled after a day in the sun, and feeling a little bit of anti-climax as it was all over so quick. Bring on Fling Festival 2014! Find out more about the Fling Festival at the council website or Facebook page. Keep your eyes on the Flikr stream for more Fling photo's.