As I type this it is Christmas Eve and I'm just enjoying some quiet creative time to myself, before all the Christmas fuss and mayhem kicks in. I noticed the Daring Cardmakers Challenge Blog had one more crafty challenge for this year, and couldn't resist showing one of my favourite decorative crafts this year. 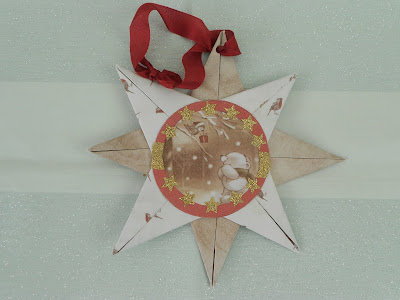 I first tried out these origami star decorations last year, making a few to give to friends and presents. I really enjoyed making them up and decorating them, so thought I'd do a few sets this year. Unfortunately I can't find the source tutorial for them at the moment, but they are really easy to make, and there are so many options for paper/card combinations, and decorating the central circles that complete the star.

While easy to make, it was tricky sometimes getting exactly the same fold and finish on both sides of the star when making them up, and I did pick the wrong type of card once, which wasn't really meant for folding and scoring and looked a little bit scruffy/creased.

The only really difficult bit for me was when it came to punching the holes in the points of the stars for hanging; it just seemed impossible to position the hole punch exactly where I wanted it, to get a hole right in the middle. Then I thought I'd mastered it and did some perfect ones, then they went a bit wonky again. Luckily when the ribbon is threaded through and each star is decorated and finished you don't notice that at all. 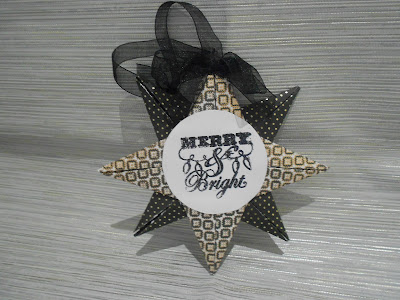 I've inserted a few pictures of the different designs I made this year, I also decorated them on both sides, as I thought it would be nice if you could switch between a sentiment and a picture if you wanted to. I am planning some non-Christmas themed stars for next year, so I'll do a full project with one of those, or post on my Instagram feed, in the meantime thank you all for reading and supporting my blog in anyway this year, and see you all again in 2019!

All the best for Christmas and the New Year. http://www.instagram.com/thesecitydays
at December 24, 2018 No comments:

I was looking for a work sample the other week and came across some of the music reviews I have had published in the past. So many different artists, and music ranging from indie rock to pure pop music. Ambient, ethereal music is not something I've come across much as a reviewer though, so I decided to challenge myself and review Claudio Desideri's first solo release 'The Strangest'.
Claudio has a background that includes tribute bands, and the new wave punk of Zephiro (worth checking out their very creatively shot music videos), and currently does beautiful things with his voice singing in a Queen tribute. That's quite a mixing pot of styles, and indicates a varied ability and musical taste, but no clues as to what a solo release would be like.

'The Strangest' is ambient and ethereal at it's core, with various effects employed to add to the atmosphere, tension running through the lyrics, and visuals in the music video. There's a quite quirky disco instrumental part, which on first listen didn't seem to quite fit with the song, but makes much more sense when you watch the video.


The repeated lyrics of "oooh ahhh, and if you wanna sing" have been stuck in my head since first listen, and overall the song is growing on me.

The effort is clear in the accompanying music video (I wouldn't know where to start with something like that) with some well chosen shots, and sharp movements to convey the message in the lyrics. There's enough to grab your attention early on, and keep it until the end. Sometimes it seemed to move a tiny bit too quick between shots, and the gestures could have been more relaxed, but these are tiny things that I'm sure I won't even notice in the next video.

Sometimes you come across singers, songwriters, and musicians that capture your interest, and give you ideas of things you could imagine them writing, singing, and being great at. Claudio is definitely one of those. While this song was more of a grower, and lacked some of the energy and emotion I've heard in his cover versions, the potential is definitely there, and I look forward to hearing what comes next.