I hope everyone is well. Thanks so much to everyone who has commented or read my last post. I am fairly new to book reviews, but they are great fun to do. Last year I joined in with some of the challenges on the Daring Cardmaker's blog, and they are continuing this year so I had to have another go. It's great fun to see how everyone interprets a theme, which this time round is HOME. 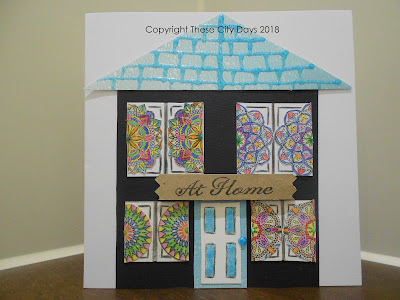 The inspiration for this card started off with the stamps; they were a cheeky purchase when I was a member of the Mama Makes design team. I'd cut a few out and coloured them but wasn't sure what to do with them, until I saw the Daring Cardmakers challenge. I thought it would be good to cut them in half and use them like curtains to frame a cut out window frame. I pieced together the rest of the card using items from my stash listed above, and decorated a bit with my new Nuvo Glitter Drops (highly recommend Nuvo, they have so many pretty colours, and very precise application).

Hope you have enjoy this blog, and do check out the Daring Cardmakers and see how everyone else has responded to the challenge. There is sure to be a variety of designs.

*Apologies for the lateness of this Christmas book review, it was released in the run up to Christmas, but I read a fair portion of it over the festive season. Im late posting, but it's never too late for a good book right?*

Christmas is probably one of my favourite times to head to the book shelves in the shops, so many novels out with a Christmas theme. I'm like a moth to a flame, I just want to buy and read them all. There's just something about festive novels that makes them so easy to read.

When I heard that Elaine Everest had plans to release a new novel, and a follow up to The Woolworths Girls, I was excited to read how the story had progressed. I was expecting good things after enjoying the previous novel, the review of which you can read here. 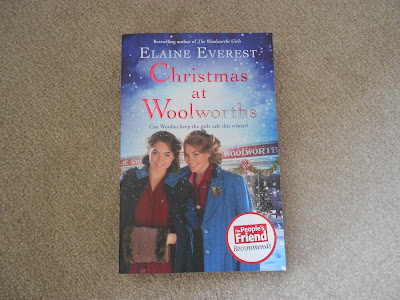 Readers pick up the story in Wartime, with Maisie, Freda and Sarah all with husbands or family members off fighting, or involved in the war effort. This time round there is a greater focus on friends and relations, so you get to know more about stalwart of Woolworths, Betty Billington, Sarah's grandmother Ruby, and her neighbour, including the ever present, but slightly irritating Vera, and the furry ever faithful Nelson.

I won't give too many spoilers away, but you may find a few love stories focused around Mike and Bob Jackson, and new additions Gwyneth and Douglas. It's the seamless introduction of new characters, and giving more prominence to those we didn't see much of in the first novel, that adds some humour and interest to the story. It's not just that though, it's the sense of warmth within when the characters bloom, and grow in confidence as the story unfolds, it's something you can relate to in every era.

Favourite moments include Freda standing up to those who commented on her age and sex when she started wartime work with the fire service, and when she was a fish out of water at a dance with US servicemen, and brash, more sophisticated women.

My only slight disappointment was that the novel was not quite what I expected from the title. I just couldn't help looking for references to Christmas, either in Woolworth's, or in the lives of the characters despite the war. When things did feel more festive, it seemed a little rushed. That being said, 'Christmas At Woolworths' did end on a high note, with a powerful sense of the importance of family, friends, community, and being grateful for what you have, and that is how it should be.

Another interesting read, from an author who has found her stride, and has already gathered pace towards her next Woolworth's Girls release. Keep an eye out in May, and find out more here.

In the meantime, look at my current reading pile, added to at Christmas with a competition win, a Robbie William biography and the Blue Planet 2 book. What shall I read next? 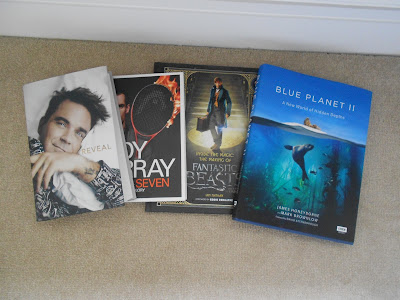 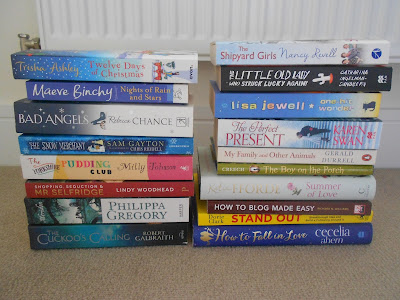 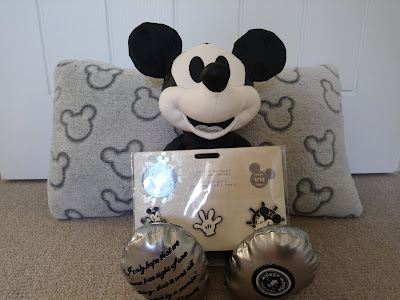