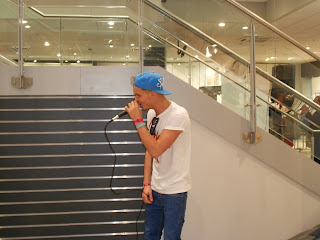 With the occasional exception of singers thrust into the spotlight on reality TV talent shows, most pop singers are used to working their way up in terms of gigs, and may be well used to playing small venues, and little in the way of an audience. When you tour retail outlets though things are a little different, and I got the sense that up and coming singer Anttix was a little bit fazed (at first) by the intimate space in the corner of Chelmsford City’s New Look store. He was there for the start of his retail tour to promote his debut single Tornado (out 28th July) and soon got into his stride for his first set, performing Tornado, and another track called ‘Fame and TV’.

Unfortunately the tracks were playing on a loop for quite a while before his performance, punctuated by jingles which included a snippet of his single ‘Tornado’, which I found a bit repetitive, so I wasn’t won over at first. As the songs wore on, I was still hard to please, and just felt ‘Tornado’ particularly needed more of an edge lyrically and musically, particularly in the chorus. ‘Fame and TV fared better on both counts, but I still left the store feeling that I hadn’t heard anything that original that would make a strong impact on today’s pop market. I was almost hoping for an acoustic guitar to appear for a stripped back, less pop formula polished performance.

Saying that, I have seen Anttix sing twice in Chelmsford now, and while I think his tracks could do with a bit more of an edge lyrically, there are some catchy hooks, and some nice guitar parts to dance along too, and Anttix has a voice that was an easy listen as well.
I can see why his fan base is growing by the day, as this is a guy has fun with his music, and wants his fans too as well. As someone who has grown up on pop music (now in my 30′s), I think I am just a lot harder to please than perhaps his fan base is, having heard a fair few boy pop acts trying to make it. All in, happy to come across him at a gig, but not enough (yet) to make me download a single or hit the repeat button.

You don’t have to take my opinion as gospel though, why not check out ‘Tornado’ for yourself and see what you think.