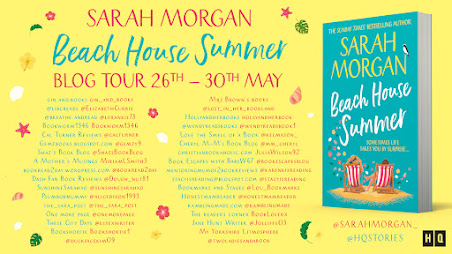 Hi everyone, I am slowly getting back into blogging after a break, my nan passed away a few months ago and work has been really busy, but it's good to get back into posting, and there's much more going on around here to hopefully see, photograph and share with you all.

I was lucky enough to be invited to join the blog tour for Beach House Summer, the latest release by Sarah Morgan recently, although too much screen time and late arrival of my review copy mean I am a little behind posting, so I am sorry for that, but let's get into the review.

Beach House Summer follows the story of Joanna Whitman, the ex of celebrity chef Cliff Whitman. When Cliff passes away she discovers another secret from a marriage full of secrets and lies; he left behind a daughter. The story follows Joanna connecting with Ashley, Cliff's daughter, and a pregnant, vulnerable young lady. Joanna takes Ashley under her wing and whisks her off for a 'Beach House Summer' that neither of them will ever forget. While Joanna seeks privacy from the spotlight and media attention that still follows her wherever she goes, Ashley seeks time and space to get her life together and is amazed when Joanna offers what she needs.  This novel follows a path of new friendships, old flames, and self-discovery against the backdrop of Silver Point, a seaside town where everyone's got your back.

This was a novel of a few unexpected twists and turns, starting with a tragedy, and the death of someone I expected to be a big part of the story. When a character questioned WHY, I questioned along with them, when romance was obviously on the cards I wondered how it would play out and how predictable it would be, it was a book that got me thinking, maybe sometimes a little too much. I got distracted by images in my head of sequels and prequels. Of Cliff playing out the attention-seeking chef role, and a sequel where Joanna had fully taken over the bookstore, and we learned more of Eden's story. For me, she was one of the most interesting characters, and I enjoyed reading about the family dynamic Sarah had created for her, the resistance, and eventual understanding from her mother was quite moving. I think it would be fair to say that some parts of the story caught my imagination more than others, and that's where the daydreaming of other possibilities for the characters took over.

I liked the little touches of humour such as when Mary-Lou told Mel all about Mrs Highgates pampered pooch eating a neighbour's begonias (why is it always begonias that come under attack). Nate's character also shone and jumped from the page. His genuine warmth, passion for cooking, and how good he is with people is something made to be seen and heard, and not just read about. He wasn't central to the story at this stage, but he stuck in my mind.

Each character has an emotion or feeling attached to their story at various points in Beach House Summer, and the strength of those feelings shines through. From Ashley's insecurities as a mum-to-be, and Mel's stubborn conviction that she is doing right by her daughter, to the weight of the world on Joanna's shoulders it's all there to feel along with them. Like this quote in one of Joanna's chapters: "Most of her life had felt as if she was in a strong current, pulled and tugged in a direction she didn't want to go. She'd been trapped by the force of it, flung around by Cliff and the media, battered on the rocks of life. But she'd survived, and she'd survive this next crisis whatever happened."

Whether it's a sense of conviction, stubbornness, poignancy, or warmth of character and togetherness it's all there to explore. I was also sitting reading this on sunny days in the garden, so it would've been fun if I could jump right in there and grab a cool drink at the beach cafe, visit the cosy bookstore, and walk along the beach with ice cream. Perhaps more could have been made of the beach house summer vibes that were promised, and my mind did wander a little in places, but the character development was very well thought through and the moments of emotion well-timed. I'm just hoping for a prequel, I know there's a fiesty character out there somewhere that could bring Cliff down a peg or two!

'Beach House Summer' is out now in paperback, hardback, and audiobook. To find out more visit Sarah Morgan's Website or follow HQ Stories on social media. Thanks to HQ for supplying a review copy for this blog tour post. What have you been reading lately? Do let me know and show me your latest blog posts, I'd love to read them.