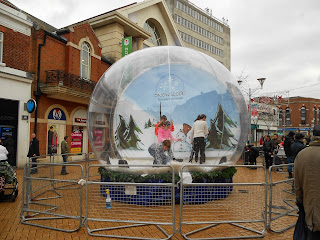 Although I started my Christmas shopping a while ago, I just don't feel properly festive until the Christmas lights are switched on in my home city. It's an annual event I always look forward too, and I've been to many - seeing penguins, reindeer's, ice sculptures, and music acts such as Lee Mead, Olly Murs, Kym Marsh (as she was then) and Jo from S Club. The town is full of festive cheer, there's always a nice community spirit, and queues of people round the hot chocolate and mulled wine stalls.

This year I popped into town for the 2013 event and I was more than ready to relax and have some fun. There were lovely lights strung between the market and shops, which created quite a stunning effect, a mobile farm created a live nativity scene, and children were busy getting their faces painted, or taking part in craft activities.

I snapped a few festive photo's then made my way up the high street to the Heart FM music stage for the afternoons main entertainment. I arrived to the sounds of a female singer and her live percussionist blasting out some dance tracks, which made a refreshing change, as previous year's events have been overloaded on Christmas songs. Before you label me the Grinch, I like Christmas songs, just not acts going on one after the other, singing the same tunes. 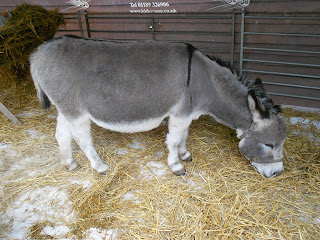 Also performing were 3 large community choirs, all with energetic choir masters, leading each choir through a wide range of old and new pop hits. Between The Big Sing, Funky Voices, and Rock Choir there was Madonna, a Take That Medley, and some amusing air guitar to 'I Believe In A Thing Called Love'. I think with 3 choirs having decent length sets, there was a different atmosphere around the stage, and not so much of a buzz/build-up towards the lights switch-on and fireworks, but you could fault their energy or vocals - though maybe their dance routines need a little practice.

Chelmsford's more recognisable faces this year were local act 'Next Of Kin', currently touring the
country after escaping the X Factor bubble, and performing two acoustic sets at our switch on event. It felt a bit like they had something to prove after being knocked out, but as far as vocal range and ability as musicians goes, they don't need to worry. I'm not a big fan of 'More Than Words' or 'Too Much Heaven', both a bit dated as songs whatever you do to them, but their version of 'Higher Love' is definitely one to listen out for, and after several listens 'Can't Find Me' is starting to grow on me as well. I'd like to see what they do with a full kit instrument wise, and maybe 2 acoustics instead of one on a track as well. If you've got it, why not flaunt it!!

That's just me being picky though, and apart from the over dose of choral energy, and being in the wrong place to get the full effect of the fireworks (again!) it was another fun event, just feeling a bit of a festive anti climax now, so I better get working on Mum and Dad to get the Christmas tree down from the loft.

Has anything special happened where you are for Christmas? who did you have turning on the lights, why not get festive and let us all know below. Until then 'Happy Christmas'.