February 04, 2021
A while ago author Miranda Dickinson put up a book love challenge on Instagram, where she would put up prompts and answer with her favourite book or books in each category. I thought it would be fun to do my own, but over on my blog (I couldn't keep up on Instagram), and have (after a bit of thought) answered all her prompts below. What would your choices be? do join in, in the comments and let us all know, it's always great to hear about the books everyone else loves.

1 - A Book You Loved
Jane Eyre, one of the classics I read quite a long time ago, and have read many times since. It's one of the books I keep in my bookcase and even bought a new copy of when the original got too scrappy. I'm not really sure what struck me about it, especially as it's quite a haunting story, but it was incredibly well written, with quite a few twists in the story, which none of the TV versions have really managed to capture.

This is a hard one to answer, but I would say the Worst Witch series of books. I've always been a fan of witches, wizards, and the magical side of Halloween. I always remember reading those books really quickly and wishing there were more, and that's one bookish memory that has stuck with me from childhood.

Easy answer, though another children's book (there may be a theme here) but the Faraway Tree series by Enid Blyton. Such an amazing writer and this book definitely fired up my imagination. I always used to enjoy escaping to the magical lands at the top of the tree.

Probably Jakob from the Twilight series. I was always more team werewolf than vampire, and although he really struggles with his change, there are some touching moments in the books between him and Bella. I think you'd feel his strength and protective nature in a hug and kiss. Obviously very volatile when vampires are around, but there was something quite appealing about that!
5. A Book Character You'd Fight
Mr Collins in Pride and Prejudice, not that he deserves a physical fight, but there's something about his character, especially as depicted in films that gave me the creeps every time I saw or read something. So I'd choose him for a verbal battle/talking to. preferably in the presence of his patron who he thinks so highly of. Just an annoying character I'd like to battle in some way.
6. A Book Character You'd Like To Be
Matilda (Roald Dahl) I love it when clever, funny children in books get one over on the mean characters, and the way Matilda dealt with her parents, and Mrs Trunchbull was really funny.
7. Your Favourite Book Cover
The short answer would be all the Christmas books- near Christmas is my favourite time of year to go shopping and all the festive books and covers jump out of the shelves and make me want to buy them all, though I think my already crazy reading pile might protest a bit at that! If I was going to choose one cover A Wedding In December by Sarah Morgan is ahead of the pack. The cosy log cabin in the snow is pretty much my idea of a Winter holiday, and the story behind the cover I really enjoyed.
8. Your Favourite Book Series
When I was younger I used to read a lot of book series, Famous Five, Secret Seven, all the Sweet Valley High and Babysitters Club books I could find. I've not read that many series recently, but one single book that's stuck in my mind is a hardback copy of The Polar Express that I won in a competition. I'd only ever seen the film and didn't know there was a book, but it's so pretty, with lovely illustrations - all capturing the magic of the story. 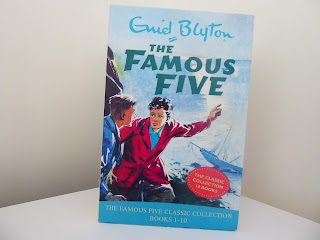