Liv Austen - A Moment Of Your Time (Album Review)


One of the best things about music is that breath of fresh air it can bring, when you need something new. Everything seems a bit samey, and then an artist comes along that just wakes you up and makes you pay attention! Liv Austen does just that. The Norwegian singer-songwriter first came to my attention when she did a duet with Alexis Gerred on his album (read the review here), and although it took me a little while to get the album, I am so glad I did. 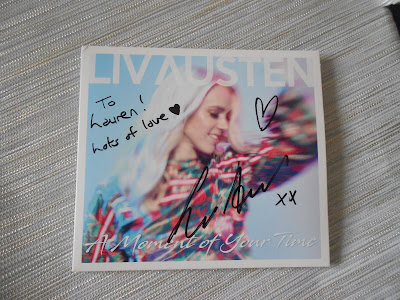 The industry has ever so slightly pigeon-holed Liv as a country artist, and I can hear hints of that in the album, but in reality this is a pop record with many influences. There are soulful ballads, upbeat punchy pop, a slight touch of urban attitude, and some indie guitars creeping into the mix, all of which makes for an easy to listen to, press repeat when you’re done record.
Window Shopping was the track that convinced me to give the album a try, and it’s still a favourite. The lyrical story interwoven with shopping references is a lot of fun, and the beat is just perfect for a summer day, or summer gig. There’s also an acoustic version doing well on Youtube, which I would recommend checking out.

It’s hard to pick out highlights from an album I have listened to all the way through, quite a few time over, but there are a few others that stole my attention more than most and The Next Time was definitely one of those. The lyrical references – chainsaws, jigsaws a square peg in a round hole was a lot of fun and seamlessly fit into the lyrics and the changes of pace made for a really catchy song.

Whole Heart was another one that made me smile. The soft vocal harmonies and piano intro worked well with the relatable lyrics, and well-chosen ad-libs, with an emotional punch in just the right places. Liv has a knack of letting a song ebb and flow in just the right way, and letting it build or fade away to suit the story and Whole Heart was a great example of that.

The whole album has a live instrumental feel to it, and you can feel the gig vibe even on CD, but if you want to dance, head on over to track 9 – Part-Time Sweetheart – this will be the dance/sing-along hit of any live session, along with Window Shopping. I’d also like to mention the title track ‘A Moment Of You Time’ – the guitars on this give it a really laid-back holiday vibe, and it adds a nice touch of soul to the tracklist.

The only thing I would say in critique, would be around ‘Don’t Regret A Single One’ – I just felt the higher-pitched vocals at times in this track was a bit overpowering, and the music was drowning out the vocals a little at other points in the song. It’s hard not to be picky at times, especially when you spot potential, but I still really enjoyed the drums and backing vocals on this track.
All in all it’s a refreshing, catchy, pop record, with a lot of soul, interesting lyrics, and some great quality instrumentation. I can’t really say any more than that, other than I look forward to hearing what’s coming next.

‘A Moment Of You Time’ is out now, and available on all your usual streaming services/download sites, on CD via www.livausten.com and if you’re lucky you may even spot it in your local HMV. Follow Liv on Facebook, Instagram, and Twitter for more musical updates.

* In the interests of disclosure I bought this musical gem and just had to give it a shout out on my blog.