August 06, 2018
Heat waves are wonderful things for helping you relax, switch off, and really lose yourself in a book, and that has basically been me recently, as I read, in record time for me, the latest instalment in the Woolworth's Girls series. Unfortunately I then got writers block when writing a review, so this has taken a while to get up, so sorry guys, but here is my thoughts.

Wartime At Woolworths picks up the action in 1943, with war still raging around the lives of the friends and family in Erith. The blurb on the back declares that the Woolworths Girls 'face their biggest challenge yet' and that certainly seems true. 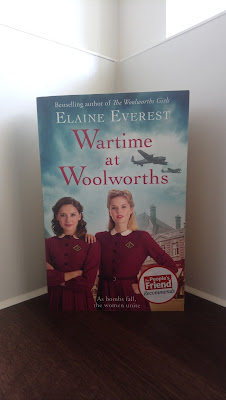 The reality of wartime is that you never knew what was around the corner, and you can live life in fear of death and destruction. There's an unpredictability about it, but it takes a skilled writer to accurately portray that on the page and give the reader no sense of when something will happen and to who, and that's just what Elaine Everest did. She captured the mood perfectly and kept me engaged with no idea of what would happen next.

I also enjoyed the fact she had gradually built up insight into what life was like in the time period over this series of books, and here she adds details of day to day life in wartime. Grey bread, the sourcing of luxuries, re-using and making clothes, and above all the escapism that a trip to the cinema brings, were all covered throughout the book, this was a story where the small details were noticed.

Small details included the fact that someone could send a letter in the morning announcing their impending arrival, and have the letter arrive before they did, that same day. Not ashamed to say I was a bit mind blown by that idea, and how quick/different the postal must've been back then.

The characters and their attitudes to life back then bought some of comedy moments to life, including when Ruby, attending a wedding tells the newly arrived Alan "I'll join you when I've seen that Gwyneth's parents are settled. They're pretty decent folk considering their teetotal". I was equally laughing, and feeling like I'd stepped into an alternate universe. 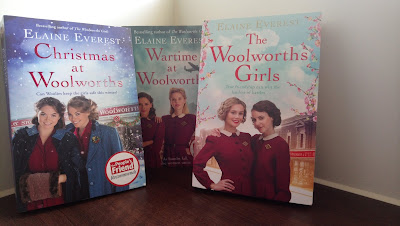 Have you read this or any of the other Woolworths Girls books? why not tweet Elaine and let her know what you think. Her handle is @ElaineEverest.

Thank you to Ed Public Relations for gifting me this book to review. All opinions are my own.