July 16, 2018
Saturday 7th July was a day of new things. It was the first time Fake Festivals had bought their touring tribute band festival to Chelmsford, and the first time I had been to one of their events. I'd bought an early bird ticket as soon as they went on sale - partly because I love day into evening events (never been one for clubbing until 2am) and I wanted to try something new. The other big draw was Flash- A Tribute To Queen, were performing.

I've not spoken much about the music I've grown up with on here before, but Queen definitely featured and I was pretty excited to hear a tribute to them for the first time. 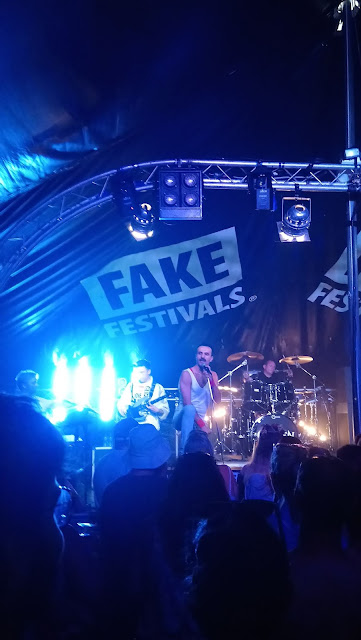 The event ran from midday to 11pm - 6 bands with roughly 1hr 15 minutes each, and 30 minutes break in-between to reset. The festival area included a fenced off outside area with food vendors, glitter face painters (should've done that!), and some children's inflatables/play activities. The main festival tent had a fast serving bar at one end and the stage with full lighting set-up at the other.

I wasn't going to miss the football, and knew my festival stamina wouldn't last all day, especially as it was VERY hot and humid, so arrived ready for some live music just before the 4th act went on-stage. Sadly the night didn't go entirely to plan, as despite being well rested and hydrated I think the heat and bad sleep caught up with me. I didn't get to enjoy as much of the event as I'd like, in the way I'd like, but I am still very glad I went.

A quick and easy ticket scan and security check, friendly staff, a good amount of outside space, and good quality sound, light and stage set-up. Although I didn't get to see as much of the event as I wanted, I still think the ticket price of £22.50 was pretty good value for 6 bands all doing just over an hours set, and the quality of the set-up.

Timetables were available beforehand as well so you knew exactly what to expect.

I wasn't too sure what the atmosphere would be like, especially after the football, but although a few people looked a bit worse for wear it stayed friendly. There were good age range of people there which was nice to see, and should be repeated more in Chelmsford.

The access to water wasn't ideal - there were no water standpipes you could fill your own bottle up from, drinking water at the bar came in a cup - not very practical in a crowd full of people wanting to jump around a bit, and the vendors outside were selling bottles for different prices outside. You also could only take in your own bottle on first entry. I think this could be improved for future events, especially when it's so hot.

Although I never felt squashed or too crowded in, it was a very hot day and there needed to be more ventilation in the tent. They should have fenced off all the event area so they could take the sides of the tent down and get some cooler air in. I think this, and previous tiredness, just caught up with me a bit and I decided to leave - during the band I really wanted to see.

But let's talk about the music, I know from others experiences the quality of tribute acts can vary, A LOT at gigs, but what I saw and heard from Guns 2 Roses and Flash was outstanding. Guns 2 Roses did a good mix of full on rock and rock ballads, some songs I'd even forgotten were Guns and Roses and that I liked!

It was definitely a moment when Flash literally bounced on to the stage with the opening bars of One Vision. What an amazing feeling to hear that song live, and this was swiftly followed by A Kind Of Magic, and These Are The Days Of Our Lives also featured in the set. It was during their set I went home, but the musicianship and atmosphere they created was great, and Italian frontman Claudio Desideri as Freddie was a find!! a bit of a lookalike, and a whole lot of voice!

Two parts of two band sets wasn't exactly what I had in mind when I bought my Fake Festival ticket, but I still made some memories, and tried something new, despite some anxiety and the heat. I would be more than happy to see either band again. Would I try another Fake Festival again? For sure, just be nice if it wasn't so crazy hot.

Find out more on the links below:
Fake Festivals
Flash- A Queen Tribute
Guns 2 Roses

ALSO I have a video of Flash performing 'One Vision' on my Youtube Channel, please do check it out, and there's some more photo's over on Instagram.