August 17, 2017
Chelmsford City Centre can seem like a quiet place at times. Gone are the days when there were promotions teams giving out free samples, street theatre entertainment, radio roadshows and more. Especially in the summer months it can see a bit too quiet.

But Bond Street create a buzz when it arrived in Chelmsford, with it's range of new to us, and in some cases, quite exciting retailers. They also added to our ever growing restaurant quota, and while I would be one of the first to say that I'd like more leisure activities and things do, we do now have choice, and that's something Bond Street chose to showcase. 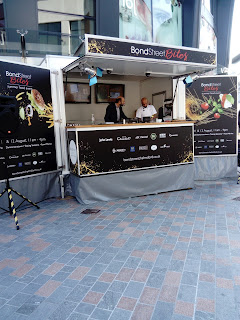 Bond Street Bites was a two day event run from a custom food stage/demo area which featured several of the restaurants and retailers in Bond Street, and a decent amount of free food!!! I went down on the Friday, in the sunshine, and checked out most of what was on offer, and it was worth a visit.

A friendly and personable presenter asked each chef questions and talked more about their restaurants and the food on offer, and some other useful info which you might not find out if you were just dining there.

John Lewis offered free samples of several different cakes, all available in their Place To Eat Café, and spoke about their menu items, then a chef from Prezzo demonstrated dishes including Bruschetta and Ravioli. They were also joined by staff from Las Iguanas who put together a number of finger food dishes, also handing out samples and giving an insight into their varied latin menu.

One of the dishes they demonstrated was:

Although I missed the talk I also picked up a leaflet on the Grape and Grain trail, a promotion 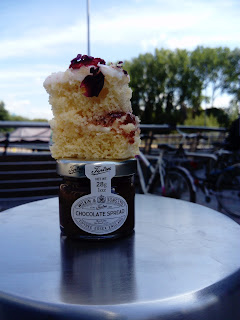 Rosewater Victoria Sponge, John Lewis - The first sample I tried, and filling even for a small piece. It was sweet, but not overly so and had a very nice taste.

Salted Caramel Puddle, Hotel Chocolat - Basically a chocolate button, but a high end one. I would never have picked up anything salted caramel in the shops, and I'm not a big chocolate eater, but this was unexpected. It had a tang from the salt that I liked.

Chicken nuggets and BBQ sauce, Byron - Byron presented their samples in cute little takeaway boxes, with little cups inside full of food, along with a menu and voucher. These were my favourite items, the sauce had a lot of flavour, and the chicken nuggets were really nice as well, definitely a step-up as a takeaway and one I would order.

Mac 'n' Cheese, Byron - I'm not really a fan of cheesy sauces so wouldn't order this, but it was a very cheesy sauce and flavourful, and well cooked.

This was lunch and a little bit more, and I was a bit full up when teatime came around! It was something new to add interest to the summer, and finally made use of what had been quiet public space.

I hope they have more events planned through the rest of the year, as I enjoyed this food break to my day. 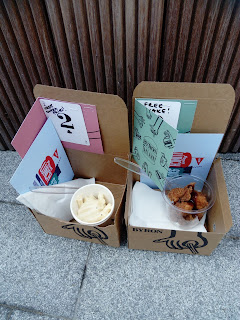 Find out more about Bond Street and it's events @ :