June 14, 2017
It's so warm right now, we've got a bit of Summer after some miserable rain, and what better way to spend some time outside, than sitting in the garden with a good book. I'd like to suggest Elaine Everest's second novel, The Butlins Girls, which I recently had the chance to read and review. 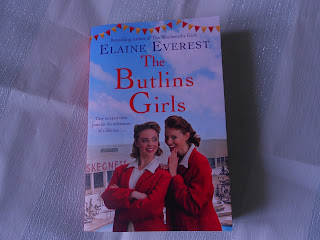 Just like her first novel The Woolworths Girls, this one trades on the nostalgia associated with a British icon, and as one of my absolute favourite things is a holiday park, it sounded like the kind of book I wouldn't be able to put down.

The story centres around Molly Missons, who after the loss of her parents, and the arrival of some dodgy sounding relatives, decides to get away from it all to take a job as a Butlins Auntie. Here she meets new friends Bunty and Plum, and the novel tells the story of their time at Butlins, their back stories and secrets, and their life at one of Britain's most iconic holiday camps.

Handsome screen star Johnny Johnson entering stage left, and taking his place as Molly's love interest in the novel seems an unlikely event, but where else would you meet and fall in love with the man who once adorned your walls, apart from in post-war Britain, I just had to remind myself a few times I was reading about a different time!

Falling in love with a film star crush isn't the only entertaining feature of this novel, as Elaine adds comedy value through typical Butlins activities such as the knobbly knees contest, and shows some of the characters discovering the joy and escapism of holiday parks, and fairgrounds for the first time. I could imagine where a few sketches would look great in the novel, or (if I'm not being too commercial) as a set of old school postcards to accompany the book. 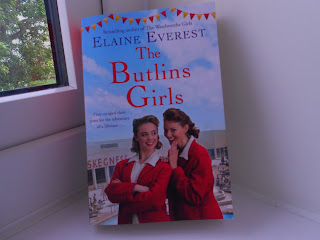 One of my favourite parts was the introduction of the Sangster family, and it was heartwarming to read of their back story and experience at Butlins. What really stood out though was one of the families entering a weekly beauty contest, and finding newfound confidence through taking part in this, and escaping to a place they'd heard so much about.

I was also lucky enough to review The Woolworths Girls, and just like Elaine's first novel this one is very easy to read, engaging, and gives a good insight into what life may have been like in the periods where the novels were set. Little details such as what an old school Woolworths may have sold, the streets and areas the girls live in, all add interest, but there were some differences. Where the characters at Butlin's had more backstories and secrets to reveal, I felt the 'Woolworths Girls' had more sparkle and personality, which is no bad thing, it just left me wanting more of both in one story!

All in all though this is a book with heart, and while I felt in places it just scratched the service of what Butlins is or was, it didn't detract from the quality of the writing, and I found it hard to put down.

Find out more about Elaine Everest here, and keep an eye out for a festive tale from The Woolworth's Girls later in the year.

* This book was kindly gifted for the purposes of this review, but all opinions are my own.