I don't know about anyone else, but I am starting to feel the festive spirit now. Christmas shopping is well underway, and so is some crafting. Sorry I've not showcased any makes for a while, but I've not had time for much crafting. One thing I was determined to do though, was to make my little nephew (1 year old now!!) a little representation for the Christmas tree.

I decided pretty quickly to make him a little stocking, small enough to hang on the tree, but big enough that 'Santa' could fill with a few goodies on Christmas Eve. The challenge will probably be finding things to fill it, given my nephew is only one, but I had a lot of fun making it.

The design is a festive Spot the Dog. My sister still has a Spot which she was given as a baby, and as Joey also has a Spot soft toy and books, I thought this would be a fun image to put on the stocking.

Most of the stocking was done freehand. I drew freehand templates of the stocking shape, and the Santa hat. Then I found a Spot picture on the Internet which was the right size for the stocking, printed that out and used that as a template. For anyone who is not great at art, I'd say give something like this a go, the freehand bits were easy to do. I was a little worried about doing all the freehand details that made my yellow piece of felt 'become Spot', as it was important to me that it looked like what it was supposed to. In the end, having a picture printed out helped, and while some of the sewing detail was a bit fiddly, I'm very chuffed with the results. 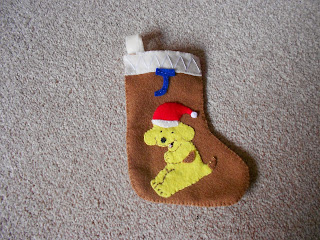 All the elements of the stocking were hand sewn, so the next task was sewing spot on to the front of the stocking. The I prepared some strips of felt for the stocking tops, and as an impulse added zig zag detail with crystal metallic cross stitch thread, which I think adds a nice subtle effect. Once both sides of the stocking had their tops, all that was left was to sew the two parts together, add in a felt hook, and then photograph the end result to show all you lovely blog readers.

I always wanted to have a go at making a stocking, but wasn't keen on all the fiddly embroidery etc. that I've seen in various craft kits. Felt gave me the option to do something that is simple to put together, and I think will stand out nicely on the tree come Christmas. Now I've done one, I may just try and come up with some more felt designs ready for next Christmas.

Have any of you made Christmas stockings, or other festive makes. What do you like doing to add your stamp on Christmas. Let's compare notes and get into a crafty Christmas spirit.

Next Month - my experience making a fabric purse. 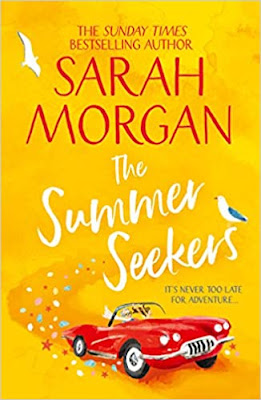